Criteria: The top 100 Villains rankings of the Horror, Thriller, Mystery, & Suspense genres–Film, Literature, Mythology, Folklore, Urban Legend. The list was contrived based on the villain’s personality, characteristics, cultural impact, turpitude, originality, performance, and other various subjective factors. #70 Drayton Sawyer (TCM series) – The two-time champion of the Texas/Oklahoma chili cook-off, and the patriarch of the […] 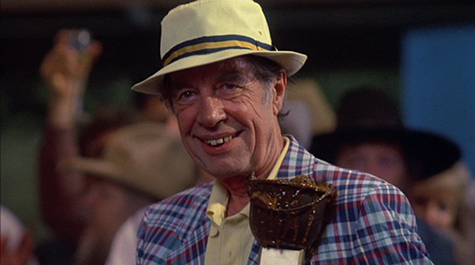 Drayton Sawyer (TCM series) – The two-time champion of the Texas/Oklahoma chili cook-off, and the patriarch of the cannibalistic Sawyer clan. His secret to award winning chili? It’s all in the meat– Human meat. Stranger still, he may be the most presentable person from the family. Running the only gas station in the area, he lured travelers into the den of their farmhouse, where Leatherface slaughtered them up. Meanwhile, Drayton would barbecue their bounty and sell it at the store. Lead by Drayton, the Sawyers reigned with barbaric force for decades out in the vast desolation of the Texas countryside.

Norma Bates (Psycho) – The overprotective, man-hating mother of horror legend Norman Bates, Mrs. Bates first appeared as a corpse in the 1960 hitchcock film Psycho. Her impression on Norman was indelible, incessantly scolding him inside his mind, still controlling him in the afterlife. This wasn’t, however, a supernatural thrall. This is a prime case of madwoman raising madder-child, perpetuating the cycle of madness. Consequently, it resulted in her own death after Norman became jealous of her carnal relations, poisoning his mother for tangling paramours. This sick dynamic of mother and child relationship has been copycatted by horror films ever since. Most notably by Friday the 13th.

The Disease (Cabin Fever) – When people are confined in an isolated environment for a span of time, there’s bound to be dissension among them. Throw in a ferocious flesh-eating malady and hysteria on steroids will unfurl. It’s fascinating to watch how vicious people’s morale plummets when put into a cruentous predicament. The level of betrayal and nihilism is shocking in this film.

Wadsworth (Clue) – Often talking and never outwitted, Tim Curry portrayed the butler in the film adaptation of the mystery boardgame CLUE. Tim Curry’s quotes from 1985: “It’s always terrific to drive the engine of the narrative. The butler controls the situation and loves it. A smug, little rat, he is.”

ZoZo (Ouija Board Demon) – As of 2016, the internet is stuffed with tales of ouija board users encountering the spiritual entity known as ZOZO. Often the spirit starts out innocuous until engrossing the users to communicate more and more, leading to increased demands from it. A wide range of phenomena has been linked it– fires, effigy requests, possession, poltergeist activity, tirades, sacrament instructions. Many have claimed that it identifies itself as being a demon from hell.

Rhoda Penmark (The Bad Seed) – The most innocent facade of any villain on this list, Rhoda Penmark is the tidy young girl that has inspired a slew of manipulative, sadistic child villains. As the granddaughter of a serial killer, Rhoda’s penchant for violence is inherent, having never even met her grandma. By water, by fire, by charm, she will destroy you for the mirth. In the hall of fame for malicious juveniles, people clamor to glimpse the rhoda portrait like Mona Lisa gawkers at the Louvre.

Consumer Recreation Services (The Game) – With a seemingly endless amount of employees, the mysterious agency that governs ‘The Game’ will go to tremendous lengths to shake your reality to the core, forcing the recipient to venture outside of their comfort zone. In other words, for a hefty price, they’ll put you through a strenuous series of mental and physical exams in order to determine what your life is lacking and then inject that into your life. This is your GAME, and welcome to it. Consumer beware: A profound life experience could result in mind-shattering consequences.

The Sanderson Sisters (Hocus Pocus) – Granted, Winifred (played by Bette Middler) merits a solo spot on this list but, as a trio, they make a deliciously diabolical team. Besides, Witches are meant to congregate in packs, known as covens. The film was originally meant to be a straight-to-Disney Channel release, but since the script turned out to be so impressive, Disney decided to recruit luminary talent, resulting in a Halloween classic. It’s the best representation of the stereotypical Witch of any film, save for maybe the Wicked Witch of the West in Oz.

Igor (Frankenstein series) – Commonly known as the original creepy henchman, Igor is the repulsive assistant to such nefarious, supercilious characters as Dracula and Dr. Frankenstein in the original Universal  Monster films. He’s counted on for anything from menial tasks to sordid and cruel ventures. In the original universal horror films, igor is the constant catalyst for aiding much of the destruction caused by Frankenstein’s monster. Like a true confidant, Igor invests his abominable life into causing mayhem. He even survives a hanging, leaving him hunchbacked with a writhed neck. You can find him at the graveyard, playing with dead things.

Isaac (Children of the Corn) – As the dogmatic orator for the children of the corn, Isaac delivered hell-fire sermons about ‘He who walks behind the rows’. Under his convictions, Isaac orchestrated sacrificial ceremonies to appease their pagan deity. Even with skilled rhetoric and solemnity beyond his years, his domineering persona was eventually quelled by the vexed cult followers. I mean, he edited the bible with scissors. How blasphemous and haughty do you have to be to do that?